So, I've played with Blender in the past, but having installed Ubuntu 12.10 and with Blender Cycles render around, I solved to give it a try again and see what could be done.

First the 12.10 repository doesn't have a Blender version with Cycles render, so you will have to manually install it from Blender website, fairly easy if you as me.

Installing CUDA to have GPU acceleration is quite a different matter, I leave that for other time, as Nvidia only supports/provides a version for 11.x Ubuntu...

After installing CUDA I found out that I wasn't entitled to GPU acceleration, my card is too old for that, following this thread you might get the idea:
http://blenderartists.org/forum/showthread.php?238557-Blender-Cycles-GPU-Rendering-Shader-Model-gt-1-3-Required

But that doesn't prevent me from using Cycles, it is just a pain to render, but, the normal Blender Render engine is quite the same.

I started with a simple scene and quickly went to nodes to see what could be done... 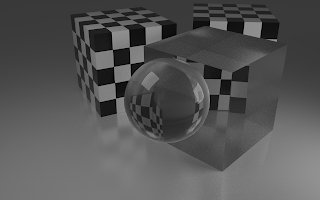 Aside from modeling some stuff, I tried more render features, textures and more stuff with nodes in a simple scene, It all went well till I added some extra stuff to the scene ... and then: 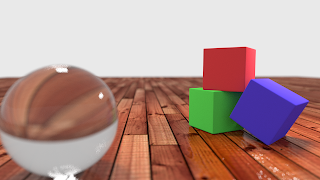 Those white dithering specks are due to the emission planes that are lighting the scene.... I have no idea how to prevent them, removing caustics had no effect :/

Maybe all that white in the background has something to do with it... but the artifact is there when it shouldn't, I noticed that the more sample rays I add the more likely it is to happen in the given scene (though they start to fill up as circles/blobs).

I could set more sample rays to reduce the dithering effect, but with 20 mins of rendering time that would be quite a longer wait.

Well, not that bad, but quite annoying... quite a pleasant surprise that I still knew my way around Blender.

I leave with a model of an Yordle (from League of Legends lore), no textures I'm afraid, I didn't have the time for that: 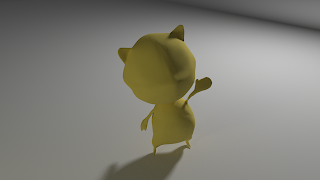 It is rigged with a simple skeleton, enough to make small animations :]
Posted by Zeca at 5:37 PM No comments: